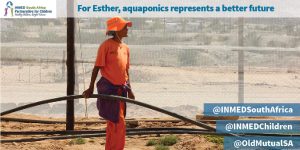 Esther is a 47-year-old widow supporting three children in the desert region of Pella in Northern Cape, South Africa. She is the leader and chairperson of the Pella Food Garden Cooperative, which has barely scratched out a living in this drought-ravaged village over the past several years. When she’s not hand-tilling the sun-baked soil for her co-op, Esther is volunteering in the local primary school vegetable garden, coaxing the earth to produce vegetables for the school’s meals program and teaching the children how to work in the garden.

Farming in Pella is back-breaking as well as heart-breaking. “Esther lost her husband 9 years ago, and when speaking of him you can still hear the love and respect she had for him and that she still hurts from the loss,” observes Janet Ogilvie, Operations Manager of INMED South Africa. The determined farmer doesn’t dwell on her hardship, though. She has been instrumental in bringing aquaponics and adaptive agriculture to her small village. INMED South Africa, with the support of Old Mutual, is in the process of installing a commercial-scale aquaponic system for the group and training the co-op’s members in climate-smart farming techniques.

Aquaponics represents hope for the future for Esther and her neighbors. With the ability to farm year-round and access to markets for their crops and fish, “Esther is adamant that the project will not only provide for her family but improve the lives of the people in her village,” says Ogilvie.