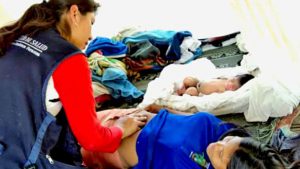 Hilda, a community health worker in an indigenous Amazon jungle village in Ucayali, Peru, hasn’t heard of the United Nations’ Sustainable Development Goals. Yet the achievement of at least one of those goals — reducing maternal mortality — depends on Hilda and many other dedicated volunteers like her. They work tirelessly to save lives in their own neighborhoods, where social, economic and geographic barriers often limit access to health services.

Peru was on the shortlist of countries that achieved Millennium Development Goals 4 and 5, significantly reducing rates of maternal and child mortality. However, mortality rates remain disproportionately high in remote, rural and indigenous areas.

That’s where INMED Partnerships for Children, a U.S.-based international development organization, comes in. With the support of Johnson & Johnson, INMED has trained CHWs such as Hilda for 10 years, equipping them with the knowledge and skills to promote healthy pregnancies. Even more critical, we have trained them to recognize danger signs that put the lives of mothers and infants at imminent risk, and to know what actions to take in an emergency.

Armed with a passion to make a difference in their communities, the CHWs — many of whom have no previous formal work experience — become recognized as powerful agents of change. Because they know many of the women they visit as their neighbors, they are able to gain their trust to accept health care services. Furthermore, as local residents who are unlikely to leave their homes for other areas, the CHWs’ knowledge remains in the community and can continues to be shared and multiplied among others.

INMED also trains health care providers to accommodate the cultural preferences of indigenous populations, which has increased the number of women who seek prenatal care and who choose to give birth at a health care facility rather than at home. We also have established several maternity waiting homes, guest houses located near properly equipped health centers, where pregnant women from remote communities can stay during the days leading up to delivery. These comfortable waiting homes have played a key role in enabling more women to choose a safer birth.

The results have been dramatic. Maternal deaths in the Ucayali region, for example, have declined from 24 in 2014 to 18 in 2015. Only six have been reported to date in 2016 — none of which occurred in INMED’s target communities, thanks in large part to the work of CHWs such as Hilda, whose actions save lives.

On one occasion, for example, Hilda visited the home of a pregnant woman who was reluctant to see her. After some encouragement, the woman allowed Hilda to enter the home. Hilda immediately noted several danger signs.

“The woman revealed that she had been feeling strong cramps for the past two days,” Hilda recalled. “I asked if she could stand up so I could give her water, but my real intention was to see what was going on. It wasn’t just cramps; there was a lot of blood in her bed.” The woman did not seek help because she thought the cramps would subside. Recognizing the urgency of her situation, Hilda took the woman to the closest emergency room, where it was determined the woman was experiencing a miscarriage.

“The intervention came just in time,” Hilda noted with relief. Without Hilda’s training and quick action, the woman would have died from extensive bleeding. “She thanked me again and again because I saved her life.”

Hilda’s story isn’t unique. Among the major contributing factors to maternal mortality in Peru are the late identification of pregnancy, postpartum hemorrhage, and hypertension (which can lead to pre-eclampsia, a dangerous complication of pregnancy). The actions and advocacy of the CHWs trained by INMED are raising awareness and transforming systems of maternal care for the most vulnerable. They are leading the vanguard — even unknowingly — toward achieving the U.N.’s Global Goals.

CHWs around the world are making similar impacts in their own neighborhoods, empowering women to take charge of their own health and that of their children. Yet much more remains to be done to achieve the Global Goals for reducing maternal mortality in the regions most at risk. Increased investment in health workforce training — including strategies for providing economic incentives to the CHWs, who currently volunteer their critical services — will provide them with the knowledge, skills and tools they need to continue saving lives in their communities while strengthening their own livelihoods.

Article published on September 23, 2016 on Devex