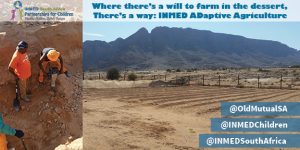 When life gives you a boulder, you pulverize it with a jackhammer. At least that’s what our team did in Pella last week, as they removed a large rock formation preventing them from finishing the foundation for their aquaponic tanks. In partnership with Old Mutual, INMED South Africa is in the process of installing a commercial aquponic system for an all-female farming co-op in the desert region of the Northern Cape.

The aquaponic grow beds have been installed near an orchard of date trees, as piles of manure are waiting to fertilize the soil under a shade cloth that will be erected in the near future. A drip irrigation system was also installed last week, while INMED Operations Manager Janet Ogilvie led accounting workshops for the group. All in all, it was a very productive week! Stay tuned for more progress reports on Facebook, Twitter and LinkedIn.