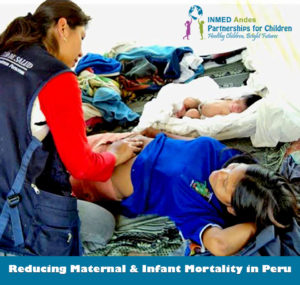 For the past decade, INMED has helped reduce infant and maternal mortality rates in Peru by equipping Community Health Workers (CHWs) with the knowledge and skills to promote healthy pregnancies. This training also educates health care providers about the importance of accommodating the cultural preferences of indigenous populations, which has increased the number of women seeking prenatal care and choosing to give birth at a health care facility rather than at home. With the support of Johnson & Johnson, INMED also has established several maternity waiting homes located near properly equipped health centers where pregnant women from remote communities can stay in the days leading up to delivery.

The results have been dramatic. Maternal deaths in the Ucayali region, for example, have declined from 24 in 2014 to 18 in 2015. Only six have been reported to date in 2016—none of which occurred in INMED’s target communities, thanks in large part to the work of our CHWs, who are saving lives every day.