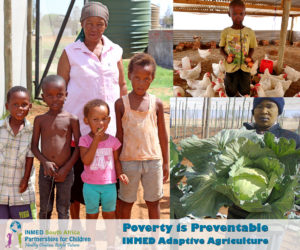 When INMED met Pietrus Moshoeshoe in a poor Free State province in South Africa, he was struggling to lead his family farming cooperative. It was not unusual for his own children to go days without food, because Pietrus had to spend what little they had to support the farm and his 66 extended family members. He couldn’t afford to purchase uniforms for his children, so they were unable to attend school. The family’s situation was dire and appeared insurmountable. “We were suffering a lot,” Pietrus admits.

Since taking part in the agriculture and business training delivered through INMED’s Adaptive Agriculture Program, however, Pietrus and his family have been able to cultivate their land productively, achieve greater harvests than ever, generate both food and income to nourish their family members every day and send their children to school. With INMED’s help the co-op has increased its monthly earnings 18-fold and has sustained this amount year-round from the sale of produce, eggs and broilers. The co-op also has been nominated for a small business award. “INMED has changed our lives,” says Pietrus.