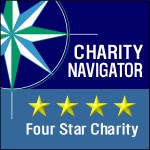 Charity Navigator, the nation’s largest charity evaluator, just awarded INMED Partnerships for Children a 4-star rating for the second year in a row. This rating recognizes INMED’s sound fiscal management practices and commitment to accountability and transparency. In 2011, Charity Navigator added a second dimension of Accountability and Transparency (A&T) to its rating methodology, and now reviews 17 governance and ethical practices.

In his letter to INMED, Ken Berger, Charity Navigator’s president and chief executive officer, reported that “only 19% of the charities we rate have received at least 2 consecutive 4-star evaluations, indicating that INMED Partnerships for Children outperforms most other charities in America.”

As a donor, you should demand accountability, transparency and quantifiable results from the charities you choose to support. INMED is proud to be such a charity, practicing good governance, ethical activities and financial responsibility. INMED spends 98 percent of our budget on the programs and services we deliver.

“This ‘exceptional’ designation from Charity Navigator differentiates INMED Partnerships for Children from its peers,” according to Berger, “and demonstrates to the public it is worthy of their trust.”