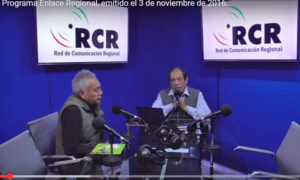 Intestinal parasitic infections are a key cause of childhood malnutrition in Peru – and have been identified as one of the neglected tropical diseases by the World Health Organization (WHO). Parasitic infections are particularly prevalent among rural and marginal urban populations living in poverty due to lack of basic hygiene services, poor water and sanitation.

In a recent interview on Television RCR (Regional Communication Network), Dr. Fernando Pérez Lastra, National Director of INMED Andes, said that one way to combat chronic child malnutrition is to carry out massive deworming activities. In partnership with Johnson & Johnson and via an interagency agreement with the Huanuco region’s health and education sectors, INMED will deliver 700,000 doses of treatment to pre-school, school-aged and at-risk populations free of charge through a regional campaign that kicks off today and will last through the end of the month.

NMED Andes has led a successful deworming program in Huanuco since 2012.To see the full interview of Dr. Pérez at RCR, visit http://www.rcrperu.pe/huanuco-implementan-programa-de-desparasitacion-regional-para-ninos/