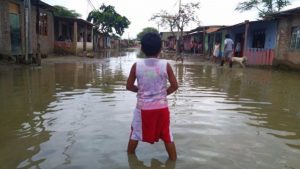 INMED Andes is supporting the efforts of  Peru’s National Ministry of Health and regional health departments to provide treatment for intestinal worms in poor communities devastated by the worst flooding the country has seen since 1998. At last report, some 72 people have been killed and more than 100,000 homes have been destroyed as people continue to evacuate. The flooding comes after a long period of drought and record-breaking temperatures. 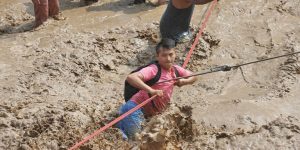 As the flood waters subside, children will be particularly vulnerable to soil-transmitted helminth infection (parasitic worms), which is already a widespread problem in many regions of the country. INMED Andes has been facilitating a national deworming campaign to treat 6 million people annually, mostly children, with mebendazole donated by Johnson & Johnson for the next 5 years. INMED Andes just launched its latest deworming campaigns in Tumbes and Piura, which are among the hardest hit by the flooding in the northern and western regions of the country.

The flooding has caused widespread bridge collapses, as mud slides have buried homes, buildings and roads. “Water is being rationed in many places, and the roads to the mountains and jungle are blocked, so we can only get to some regions by plane,” notes INMED Andes National Director Dr. Fernando Perez. “We have already made arrangements to deliver mebendazole to Piura by plane from Lima. We hope to keep people in the flooded communities healthy as they recover from this disaster.”

To support INMED’s efforts to treat children and their families who have been devastated by this flooding, please visit https://donatenow.networkforgood.org/inmed today!