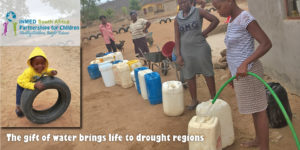 South Africa is facing its worst drought on record. The province of Limpopo has been so severely affected that it has been declared a disaster area. In response, INMED South Africa has developed a drought relief initiative for the Pjapjamela Women’s Cooperative in the Pjapjamela village of Limpopo. With no municipal water supply and inoperable community water boreholes, traveling through dangerous terrain to access to water is a life-threatening daily challenge.

The Pjapjamela Women’s Cooperative is comprised of eight unemployed young women, which was given a piece of land by the local tribal authority for vegetable production. When the community’s water supply from four faulty boreholes was discontinued, so was the cooperative’s farming endeavor. The property is also home to a nursery school that now depends on the local municipality to periodically truck in water to refill its 5000L water tank.

With support from SAB, NMED has installed a fully functioning borehole, an additional 5000L water tank and a generator to pump the water. INMED also installed a drip irrigation system to ensure water conservation. To jump start the co-op’s farming efforts, INMED supplied the group with seeds for initial planting, basic gardening equipment and training on vegetable production and drip irrigation maintenance.

Although this project was specifically funded to assist a “women in farming” program, it has extended the entire village of 140 households a life line to water and fresh produce. Members of the community now fill their water containers at the INMED borehole, and the children at the nursery school no longer go thirsty. They also will have a daily diet of fresh produce from the farm. For more on INMED’s adaptive agriculture projects in South Africa, visit https://inmed.org/what-we-do/changeadaptive-agriculture-and-aquaponics/south-african-adaptive-agriculture-program/