(Orange Farm, South Africa) South Africa is facing a public health crisis as obesity rates rise while hunger and malnutrition persist for millions of children. The problem is complex, but a new program is tackling it through a common-sense approach to help build a healthier future for the nation’s children.

INMED Partnerships for Children’s Health in Action program, funded by the Mondelēz International Foundation, will guide more than 100,000 primary school learners in at-risk communities near Johannesburg and Port Elizabeth. Communities will take action for better health through hands-on activities about nutrition, physical activity and school gardens that will provide nutritious fresh produce to supplement school meals.

“We are thrilled to know INMED will soon be working alongside local communities, teachers and parents to establish the foundation for a healthy school year by promoting nutrition basics, encouraging active lifestyles and expanding access to the types of nutritious foods that combat malnutrition,” says Mondelēz International Foundation President, Nicole Robinson.

A project launch event was hosted on Oct. 21, 2015 at Pudumo primary school in Orange Farm, outside Johannesburg, where INMED previously worked with teachers and students to establish a traditional school garden and aquaponics, an innovative system of combined fish and vegetable production. To celebrate the start of the new Health in Action program, the school, which serves vulnerable children, harvested an entire crop of spinach. 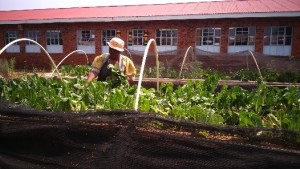 “If it wasn’t for the vegetables from both the aquaponics and the garden, the kids were not going to eat as we do not have anything to feed them except pap,” reported one of Pudumo’s food handlers. “The food we received from the government is finished and we are not sure when more food is going to be delivered… We were planning to harvest next week, but we just couldn’t afford to let the kids go a day without any food. At least they will now have pap and vegetables grown from their own yard.”

Pudumo’s situation is not uncommon. Many children in the communities selected to take part in the Health in Action program depend on the school meal as their only substantial nourishment of the day. But when supplies run low, many schools have nothing else to offer, so school vegetable gardens can represent a vital source of nutritious food and security.

The Health in Action program will be implemented by INMED Partnerships for Children and INMED South Africa in partnership with district departments of education in Gauteng and Eastern Cape, which enthusiastically welcome the initiative. 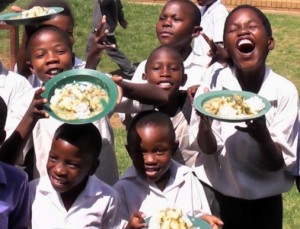 Linda Goba, chief education specialist for education social support services in Port Elizabeth, says, “The program that INMED will be rolling out within the Port Elizabeth District is a very welcome intervention, as cases of poverty and malnutrition among learners who solely depend on the school nutrition meal for survival are often reported.”

Even before its formal launch, the Health in Action program had already gained attention at the national level. “I am convinced that for the South African Government to succeed in providing required services to the citizens it has to hold hands with all the partners in the space,” says Mami Maduna, deputy director for sustainable food production in schools in the National Department of Basic Education. “I wish that INMED’s Health in Action Program can grow to an extent where targeted schools are able to sustain themselves and feed themselves.”

The new Health in Action program is based on the successful initiative of the same name that INMED, in partnership with the Mondelēz International Foundation, has carried out in Brazil since 2010, improving nutrition and well-being among nearly 450,000 children in 1,000 schools. The South African program will introduce innovations to the model, including an expansion of aquaponics and “recess buddies” recruited from among local unemployed youth will help encourage children to take part in active play at recess time by guiding activities and monitoring safety.

“We are very excited at this opportunity to work with the Mondelēz International Foundation in implementing this program,” says Program Director Unathi Sihlahla, “as contemporary research continuously informs of increased numbers of South Africans being overweight, particularly children of school-going age.

“The Health in Action program shall pull together and harness inputs and contributions from all role players within the school communities in ways that seek to go beyond theorization and to derive practical meaning from the concepts of nutrition education, physical education and active play, and food gardening,” Sihlahla says.

INMED Partnerships for Children is an international humanitarian organization working to rescue children from the immediate and irreversible harm of disease, hunger, abuse, neglect, violence or instability, and to prepare them to shape a brighter future for themselves and the next generation. INMED has improved health, lives and opportunities in more than 100 countries since 1986, and has worked as an international NGO in South Africa since 2006. INMED’s in-country operational group, INMED South Africa, is incorporated under Section 21 and is a registered non-profit organization (NPC/PBO) recognized by the Department of Social Development.

About the Mondelēz International Foundation

Over the past 25 years, Mondelēz International and its Foundation have contributed approximately $1.6 billion to charitable organizations around the world. The Foundation recently pledged $50 million to community programs to increase physical activity for children and their families, to secure fresh foods through local agriculture and to encourage better nutrition education. The Foundation receives its funding from Mondelēz International, Inc. a global snacking powerhouse, with pro forma 2014 revenue of more than $30 billion. The company creates delicious moments of joy in 165 countries as a world leader in biscuits, chocolate, gum, candy and powdered beverages.