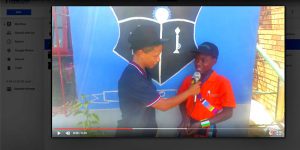 INMED invites everyone around the world to cheer on Khunedi Mashishi as she competes in the South Africa’s junior national cross country championship today. Khunedi is an 11-year-old fifth-grader at Paradise Bend Primary School, an INMED Health In Action (HIA) school in in Diepsloot Gauteng. Khunedi is an amazing young athlete who loves to compete in the 3km long distance race. She runs so fast, in fact, that her school mates have nicknamed her Caster after 2016 Olympic Gold Medal runner Caster Semenya.

Khunedi knows a little something about gold herself, having brought home a regional gold medal in her age group for Gauteng. Getting to the national competition in Nelsruit, however, appeared out of reach for Khunedi, who comes from an impoverished household. The funds required for travel and accommodations for the event were cost prohibitive even for her school to provide.

“When INMED South Africa heard about Khunedi, we stepped up to sponsor her for the event, providing her track suit, uniform, travel and accommodations,” notes INMED SA Operations Director Janet Ogilvie. Khunedi also will be sporting an INMED tee-shirt, cap and water bottle. “As Paradise Bend is one of INMED’s Health in Action Schools, we felt the sponsorship reflected our ethos of nutrition, exercise and healthy lifestyles as a foundation for success. INMED’s sponsorship not only benefits Khunedi but also the other students at Paradise Bend, who are cheering her on,” she adds.

INMED thanks the Mondelēz International Foundation for its support of our Health In Action programs in South Africa, Brazil and Peru.

Watch this video for an interview with Khunedi before the big race.