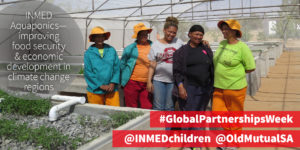 Today’s featured global partner during #GlobalPartnershipsWeek is Old Mutual, which helped INMED South Africa launch an adaptive agriculture project for an all-female farming cooperative in the desert region of Northern Cape, South Africa, where the unemployment rate hovers around 70%.. The Pella Food Garden Cooperative, consisting of five women (one of whom is disabled), had been struggling to farm this drought-ravaged land for eight years but had not generated enough income to utilize all their land or buy inputs. With a commercial aquaponics system and training in adaptive agriculture techniques from INMED, the co-op has generated such a bounty of produce and fish that they’re not only turning a profit, but also providing food security and economic opportunities for their community. Learn more at https://inmed.org/aquaponics.