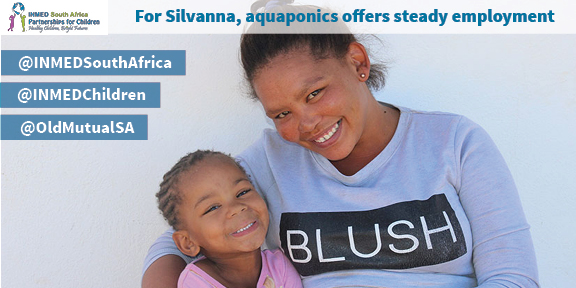 Resilience in the face of climate change. Silvanna is a member of the Pella Food Garden Cooperative in the Northern Cape of South Africa, where drought conditions have become perilous. At age 25, she is the youngest member of the co-op, which is working with INMED and Old Mutual South Africa to install a commercial aquaponic system and learn adaptive agriculture techniques to improve their struggling farm.  Although Silvanna is well educated, she has been unable to find a job in her community, where unemployment rates are extremely high and so is the crime.

After her husband drowned last year, leaving Silvanna a single mother, she decided to join her mother, Esther, in the co-op. Esther, also a widow, is the chairperson of the all-female group and is helping to raise granddaughter Tassie.

Life is not easy in Pella, but this little family has hope for the future in their new aquaponics venture. Stay tuned for more updates from our INMED South Africa team!