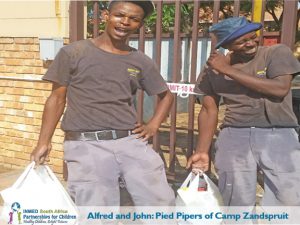 INMED South Africa Operations Manager Janet Ogilvie thought she would brighten the day of two hard-working gardeners in her apartment complex by giving them some boxes of food donated by one of INMED’s program partners, who instructed her to distribute the food to those in need. Little did Janet know that her small act of kindness would brighten the lives of dozens of others. The two gardeners, John and Alfred, live in a squatters’ camp in Johannesburg. It is home to hundreds of impoverished and hungry children. Rather than keeping the food for themselves, John and Alfred share a portion each day with the children in the camp. “They have become the Pied Pipers of Camp Zandspruit,” says Janet. John’s response was one we should all follow: “We have more than these poor children, so of course we share with them.”

Are you willing to share your gifts with children in need? Volunteer, shop on Amazon Smile or donate to INMED at https://donatenow.networkforgood.org/inmed. Your own simple act of kindness could mean the world to a child. Leave a comment for Janet, Alfred and John!