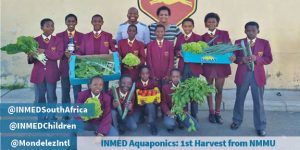 After only 6 weeks, INMED’s aquaponic system at Nelson Mande Metropolitan University (NMMU) has produced a bounty of fresh vegetables for disadvantaged schools in Port Elizabeth. Our first harvest was delivered to 4 schools in Kwa-Zakhele and Motherwell late last week and is being incorporated into the school menus this week to feed fresh green salads to more than 1,800 students.

INMED and Mondelēz International Foundation launched the aquaponic system at NMMU in mid-March to provide nutritious foods for struggling communities and to serve as a teaching tool for adaptive agriculture.

“Both learners and teachers could not believe that gravel has been used as a medium for growing the crops, yet the produce still tastes so good,” noted Unathi Sihlahla, INMED South Africa’s Health in Action Program Director. “I also heard from the teachers that our harvest was the first time a majority of the learners had ever eaten green salad.” The produce delivery was especially timely for one of the schools, which was preparing to send a number of children to a camp but did not have enough food supplies for the campers. “A teacher at that school told me the vegetables came in very handy,” Silhlahla adds.