A boost for struggling famers in the desert: INMED South Africa is gearing up to install the first aquaponic system in the small village of Pella in the Northern Cape province for a struggling farming cooperative of 5 women. Located in the northern part of the province bordering Namibia, Pella’s terrain is scrub desert with a salty consistency that stunts the growth of most vegetables. 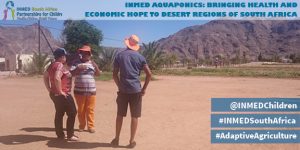 The Pella Food Garden Cooperative has been scratching a meager income from its land over the past 8 years—earning roughly $20 per month from the sale of its produce with a small amount of vegetables left over for their families. The unemployment rate in the area hovers around 70%.

With the support of financial services provider Old Mutual, INMED will install a medium-sized aquaponic system on the land for the group. The project will include a shade canopy for traditional vegetable production as well as supplementing the soil with rich compost.  A full-time INMED staff member will provide daily training and will work with the group for a full year. INMED also will donate a computer to the group, along with computer skills training and basic accounting, marketing and sourcing lessons.

Earlier this week, Old Mutual Foundation Manager Dianne Richards met with Pella Food Garden Chairwoman Esther Nel and INMED South Africa’s Morgan Jonas, who will be based in Pella throughout the project, to survey the site.

Old Mutual has a long history of supporting community development and sustainability projects in South Africa. Learn more at http://www.oldmutual.com/rb/community.jsp